skip to main | skip to sidebar

Interview with The Gaffer, Founder of EPL Talk

A cornucopia of information, soccer blog EPL Talk is the site for fans of the English Premier League. Loaded with straight news, opinion, great podcast interviews, and the skinny on how the world's richest league is broadcast here in the States, EPL Talk cuts no corners in it's coverage of England's top flight.

While there's plenty to praise founder Christopher Harris (a.k.a. The Gaffer) for, personally, I have to commend him on his intellectual honesty. Reading through any of his opinions, you'll find that Harris not only calls it like he sees it, but is also willing to take a step back and correct a previous statement and even admit to being wrong. That's not something you see very often in our opinion heavy soccer blogging community.

Below is part of a recent interview BL had with Harris. You can find the rest of the interview at BL's soccer column at The Examiner.

BL: How often do you visit Europe to watch games? What teams and/or grounds do you prefer?

Christopher Harris: I've been going back to Europe about once every two years to watch games. Last summer, I went to Switzerland for a long weekend to watch the incredible 3-0 win by the Dutch against Italy at Euro 2008. I also embarked on an EPL Talk Tour in late 2006 where I toured England to watch four Premier League games and one Champions League match inside 10 days.

There's no one Premier League team I support so it helps me remain objective. I'm fascinated by old English stadiums after reading all of the books by Simon Inglis, so I have an affinity for two of the most historic grounds in England, Fulham's Craven Cottage and Everton's Goodison Park. The sightlines are terrible in parts of the stadium, but the architecture and atmosphere are unbelievable.

BL: MLS is known for bringing Beckham to LA and selling its best young players. Do you see MLS becoming a world force in football or will it remain like the Australian game, far away in distance and quality?

CH: I don't see Major League Soccer becoming a world force in football, but I do see the league continuing to be a breeding ground for players who will end up in Europe. It all comes down to money. As long as the European leagues keep generating the massive amounts of TV revenue and sponsorship deals, the power will always remain in those countries. I can envision MLS becoming better respected by pundits worldwide, but it's going to take several more years to turn the non-believers into believers.

BL: Barcelona has expressed interest in an MLS franchise in Miami, and Arsenal has ties with the Colorado Rapids. It seems Europe sees the US as a fertile ground for merchandising and promotion. Will we see an improvement of North American coaching and talent, or will Europe merely use the MLS as a youth academy?

CH: I believe Europe will continue to use MLS as more of a youth academy than a new revenue stream. I don't see the European clubs placing much value in selling a lot of merchandise, but if they're able to uncover new talented players to enter their feeder system, the European clubs will profit most. There will be some opportunities for clubs such as Arsenal to improve the North American coaching system, but I don't see that as a priority for the Gunners, Barcelona or other clubs that are planting American roots.

BL: It seems we’re in a new money league year after year, with ballooning TV contracts and now Middle Eastern interest in the EPL. What does mean for the future of European football?

CH: I really feel that the role that UEFA and FIFA play is being undermined by the rise of the Premier League. The amount of money and TV revenue being pumped into England is enormous. To the typical soccer fan, we often become disappointed when the Premier League season takes a pause to allow for international games. This is a perfect example of how international football, as we know it, has quickly declined while the Premier League has become the true global league.

CH: On the field, it has to be the moment where I proposed to my then-girlfriend-now-wife on the field at Lockhart Stadium at half-time between Miami Fusion and Tampa Bay Mutiny in front of 12,000 fans. Off the field, it would have been my trip to London where I found the remains of one of Arsenal's old stadiums in the backyard of someone's house. The stadium was where Woolwich Arsenal played until 1913 before the Gunners moved to north London. The stadium was demolished and a housing estate was built on it, but luckily a few remains of Arsenal's history are still visible there. Pictures and audio from my trip to Arsenal's Manor Ground are available on my website, EPLTalk.com.

As far as an actual football match, my most memorable moment was watching my team Swansea City play their first game in the top division in English football against the then-mighty Leeds United. Against all of the odds, the Swans smashed Leeds 5-1 that hot August day and I'll never forget the experience for the rest of my life.

Posted by soccermad at 1:33 AM 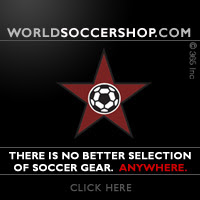